I recently had the opportunity to attend the 2nd BioVeL Workshop on taxonomic and phylogenetic workflows titled "Developing interdisciplinary methods for conservation biology and ecosystem research – taxonomic and phylogenetic workflows in biodiversity research". It was a joint effort of the BioVeL EU project and the Swedish LifeWatch initiative, and it took place at the University of Gothenburg, Sweden at the Wallenberg conference center between 10-11 May 2012. The workshop was attended by a number of project partners as well as external stakeholders, such as members of the affiliated EU projects ViBRANT and agINFRA (David King and me), along with representatives from other initiatives and natural history museums.

The aim of the workshop was to bring together researchers in the area of biodiversity along with technical people working with related tools and infrastructures, discuss about tools and workflows used and share experiences and ideas in order to optimize these. 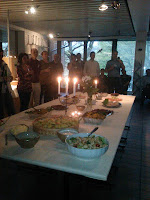 I was lucky to attend the social dinner held at the Gothenburg Natural History Museum, as it provided me with a nice opportunity to meet some of the participants even before the workshop (it would be my first time among the biodiversity researchers so there were no familiar faces among them). The museum is really interesting, packed with well-organized specimens and exhibits. The dinner was based on traditional recipes and dishes, which were previously unknown to me; however I have to admit that most of them were really tasty! There was a really friendly atmosphere and I also managed to make contact with the director of the museum, towards the collaboration with the Natural Europe project, through its affiliation program.

The workshop was also interesting, featuring a big number of presentations that helped me understand the way that this specific community works and the needs raised regarding tools and workflows. Some of the presentations were too technical or too focused for me, but still there were interesting points in almost all of them. On the other hand, the social events provided an opportunity for networking and getting to know each other. My impressions of the BioVeL workshop have already been described in the Agro-Know wiki page.

Trivial stuff about my trip to Gothenburg: 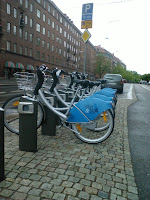 Posted by Vassilis Protonotarios at 18.5.12